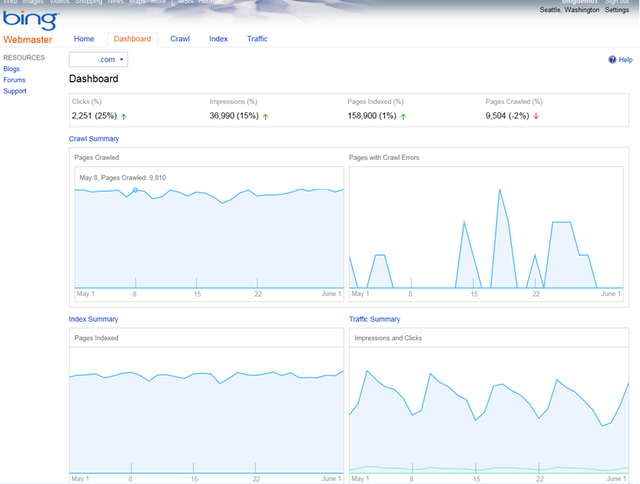 We’ll start from the announcement of “the release of the updated Bing Webmaster Tools,” as announced in July on www.bing.com.

According to the information provided at the time, “After the Bing launch, we reached out to the webmaster and SEO communities to see how we could improve the Webmaster Tools. Your feedback was very consistent: you wanted more transparency to see how Bing crawls and indexes your sites, more control over your content in the Bing Index, and more information to help you optimize your sites for Bing.” That’s the word from Anthony M. Garcia, Senior Product Manager for Bing Webmaster Tools.

The goal, according to the Webmaster Center, was to change everything, or, in the staff’s words “hit the reset button and rebuild the tools from the ground up.” The latest tool was announced by Garcia in the same forum on Dec. 14. He wrote that a new Inbound Links feature was released to provide “registered site owners the ability to easily & intuitively retrieve data about links to their sites. “

Bing apparently got a lot of feedback from SEO pros and Web-site owners about “the importance of this data to better understand how their sites are ranked in Bing.”

Users can now learn details about the number of inbound links over time, with details on URL and anchor text. In addition, users can export this link data so it can be studied offline.

Garcia wrote, “It is important to note that the count of inbound links will be based on content stored in the Bing index vs. a complete, comprehensive count of links between every page on the Internet.” This could be a crucial distinction for many site owners and other industry professionals.

New top-floor tools such as the just-announced Inbound Links item have to be supported by a strong and well-constructed foundation and lower floors. That was the goal when Bing “hit the reset button” a few months ago. Developers were aiming for a simpler experience that was also more intuitive.

The focus, according to Bing, was on “three key areas: crawl, index and traffic.” The new work included Index Explorer and Submit URLs, which basically provide more information about Bing’s crawls and indexes, but also gives the user improved control. Garcia wrote:

Index Explorer gives you unprecedented access to browse through the Bing index in order to verify which of your directories and pages have been included. Submit URLs gives you the ability to signal which URLs Bing should add to the index. Other new features include: Crawl Issues to view details on redirects, malware, and exclusions encountered while crawling sites; and Block URLs to prevent specific URLs from appearing in Bing search engine results pages.

In addition, the new tools take advantage of Microsoft Silverlight 4 to deliver rich charting functionality that will help you quickly analyze up to six months of crawling, indexing, and traffic data. That means more transparency and more control to help you make decisions, which optimize your sites for Bing.

At this point we should have a better-than-average idea of what the developers and managers intended with the new Bing Webmaster Tools. But if we don’t understand the overall changes made we might find that we’re a bit confused about the latest innovation. Let’s take a look back at some foundation material.

In previous incarnations, Bing was Live Search, Windows Live Search and MSN Search. This new “decision engine” came under the broader category of Web search engine and was introduced to the general public in San Diego in May 2009. It was online a few days later.

That first product included such changes as search suggestions listed as queries are entered. According to information from the company Bing also included a list of related searches based on Powerset semantic technology. (Microsoft bought Powerset in 2008.) Bing was also introduced as the muscle behind Yahoo! Search.

To get to the roots of Bing predecessors you have to go back an entire lifetime (in Internet terms) to 1998 and 1999. At that time, the company offered MSN Search and gradually added such improvements as self-constructed search-engine results that could be updated on a regular basis. Serious upgrades were moved out in 2004 and 2005, with results made available to other search portals.

In 2006, the world was introduced to Windows Live Search, the replacement for MSN Search. This new iteration used such tabs as Web, images, news, desktop etc. It was at this point that Microsoft no longer used Picsearch to provide images within the service. In-house developers created their own image-search mechanisms.

A year later the company effectively changed the playing field by moving the search products away from Windows Live services. The new product became Live Search, under the Platform and Systems division of the company. It’s important to also understand that Live Search was integrated with Microsoft adCenter at this time.

Some of the key elements in the transformation of Microsoft search tools (from Windows Live Search and MSN Search to Bing) include:

It’s also essential for industry watchers to understand the significance of the change from the “Live” moniker. This decision was made by a company that was concerned about brand image and brand awareness. Bing was born.

So, we’ve come from the last century and MSN/Live Search to Bing, in about 10 or 11 years. Where does that leave us? Well, in 2009 Microsoft and Yahoo! signed an agreement to replace Yahoo! search tools with Bing. The contract is intended to last 10 years.

Not only has Bing become the power behind another brand it has resurrected Microsoft’s share of the search market. Industry figures show that the big company’s market share was declining until Bing gave it the adrenaline rush needed. In October 2010 Bing was in the top five among search engines by volume.

Was the transition from Live to Bing painful for users? It would be necessary to survey a majority of those folks to get an accurate picture of what the change meant. Microsoft and the people behind Bing introduced the change as good news.

In July, Garcia wrote, “We have good news for all the veteran users of the Bing Webmaster Tools. Your existing Webmaster Center accounts have been automatically upgraded to the new tools. This means that starting today, you’re already a registered user of the new Bing Webmaster Tools. There’s no need to create a new account, change ownership verification codes, or re-enter site data. If you don’t have a current account, you can easily sign-up and register your sites to begin using the new tools.”

A few veterans have classified Bing Webmaster Tools as good, if not the best. There were some preliminary problems with Bing reporting targeted United States Web sites as being United Kingdom sites. The problem seemed to be with specific tags that have the letters “gb” in them. This was written about on SEORankings by founder Wesley LeFebvre, based in Seattle.

At the time, LeFebvre asked if some of these sites were suffering in the organic-ranking category because of the mistaken information. He also questioned the validity of Bing, Google and Yahoo! local rankings in light of this information. LeFebvre set a goal of finding out if other organic search engines use this tag.

In October, Steve Tullis wrote on the Webmaster Center blog “In keeping with our themes of rapid change and responding to input and feedback from the webmaster community, we are working on future feature planning for the Bing webmaster tools and we would like to hear your thoughts in a few areas.”

Tullis discussed Crawl-Delay and asked several specific questions about support and control in this area. He asked users and webmasters if they preferred to have crawl-delay supported in robots.txt, in addition to several other pointed questions.

The door to getting assistance with Bing Webmaster Tools is on the Bing Webmaster Center Help page. While that may seem obvious, it doesn’t hurt to make contact with the source somewhere in your search for information about new versions, upgrades and additions. Judging from initial reports from both the company and a few users, the new tools are workable and the Inbound Links addition is absolutely essential.

It’s a bit early to try any detailed comparisons on Bing Webmaster Tools and its Inbound Links structure. But rest assured there are plenty of people out there who will be providing useful reports.