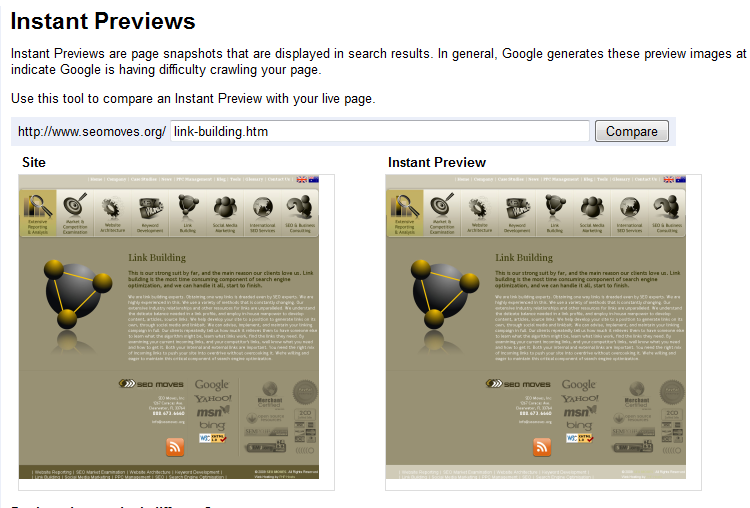 It showed us as having 26 errors on this page, seems like a lot considering our website is fairly tight (not as tight as our clients websites).

One last interesting note, our page actually appears rock solid in the Google Search Preview, yet not in this instant preview….hmmmm…..

Google Webmaster Tools are a popular feature, servicing hundreds of thousands and maybe even millions of website owners and web analytics over the world. Everybody works with the provided numbers, without questioning the reliability of the data. However, ask a mechanical engineer – and he will tell you that everything in this world has a “tolerance” and no value is absolutely accurate.

The same mechanical engineer will tell you that usual general acceptable tolerance is about 1%, so when certain parts should be 10 inch, it can easily measure 10.1 inch or 9.99 inch – and will still pass the Quality Assurance test.

It seems, Google is not yet ready to go into Product Design. Reportedly, the numbers offered by Google Webmaster Tools are only 90% accurate. According to Google’s Asaph Zemach, who was asked about number of impressions staying constant for three months time: “…when you see 24,900,000 you should really think 25M+/- 2.5M…”

Thus, if you think that your website is ahead of competitors, with 50 million impressions compared to their 48 million, they might be already ahead of you, as your actual figure might be as low as 45 million and theirs – as high as 52 million… As usual, statistics can be deceiving – and Google’s +/-10% just makes it more so…