In the world of Web analysis the software title Piwik should be very attractive to those in the open-source sector. Piwik is an open-source Web analytics program (General Public License) that works in real time.

Key features include detailed reports about visitors to your Web sites as well as specific information on the keywords and search engines used to reach your location. You can also track data related to most popular pages. 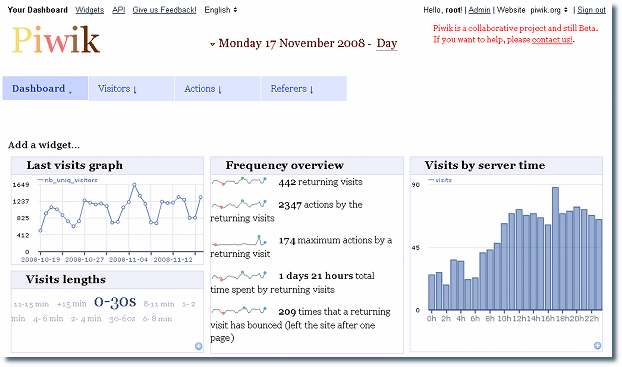 One of the nicest features about Piwik is that you can use it whether you speak English or not. In fact, the software is available in more than 30 languages already and the number is growing.

Interested individuals can try Piwik with an online demo. To install Piwik you only need to download the latest release, upload to your Web server and open your browser. *PHP 5.1 and a MySQL database are required. Installation will take about five minutes and should be automatic. It can be downloaded from the Web site as “an open-source alternative to Google Analytics,” according to www.piwik.org. The download provides a JavaScript tag that can be copied and pasted on Web sites you would like to track.

It’s easier to describe what is not included in Piwik 1.0 than it is to list all the tools and features available. Think of this as a very complete analytics program that “won’t provide advanced web analytics features that can be found in other commercial products: custom report generator, custom segments and real time segmentation, funnel analysis, advanced ecommerce reporting, etc. Some of these features could be built in plug-ins, but require significant effort and challenge to make them work with high traffic websites. We are building an open web analytics framework that people will use to later add these advanced features.” (Piwik Web site)

The Piwik team emphasizes that if a developer builds a feature that is not included already team members will “definitely work with him/her to integrate the feature in Piwik!”

Marketing information from the Piwik folks states that the real-time analytics reports help separate this software from the competition. Report frequency can be selected for high-traffic Web sites. New features can be added and unneeded features can be removed, primarily because Piwik features are “built inside plug-ins.” Developers can build their own analytics plug-ins with ease. According to plan, Piwik is installed on the users own server. “You can get all the statistics using open APIs (publishing the data in may formats: xml, json, php, csv).

The user interface can be customized, with reports fine-tuned to individual use. You can view your activity with a last-visits graph that shows the highs, lows and baseline numbers you need to understand how your sites are working. View a list o external Web sites with associated information such as visits, unique visitors and action per visit. Follow your visitors with a chart that shows browser use by family and with a map showing country of origin. Of course, the keyword list by number is essential information displayed in the easy-to-read user interface. 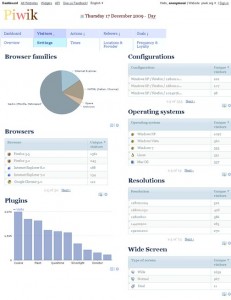 We mentioned earlier that PHP 5.1 and a MySQL database are required for download and use. PHP (Hypertext Preprocessor) is a general-purpose scripting language designed for Web development, with the goal of producing dynamic Web pages. (Wikipedia) PHP performs operating-system tasks and may also work as a graphical application.

The MYSQL database is recognized as the world’s most popular open source database because of its consistent fast performance, high reliability and ease of use.” (www.mysql.com) MySQL is the database of choice for numerous applications and runs on “more than 20 platforms.”

This type of foundation allows Piwik to be implemented with relative ease when you want to track Web activity with accuracy. As the Piwik team has stated, the project started with a goal of producing a “solid Web analytics product.” But the individuals took the process a step further and focused on “a great user experience.” It seems they have hit the mark, as users report a painless installation process, a good interface design and reports that first-time users will be able to understand right away.

In the effort to encourage “an active community” Piwik has focused on documentation for users and developers, strong forums and plug-in construction so that developers can “customize Piwik, record new custom data or access new reports.” The Web site sends out a call for people who are interested in translations or beta testing. Developers are directed to the “developer zone” to find out how to build Piwik plug-ins.
Developer documentation includes:

Perhaps the most important factor separating Piwik from Google Analytics is the open-source foundation. Google Analytics started out with proprietary technology that often tailored reports and data to those who use other Google services. Piwik was introduced in France and has gradually built a large following (30 languages)!! Even if other Web analysis software is free, Piwik stands a better-than-average chance of gaining an even larger foothold in the Web-business world.

Piwik is open source analytics for the user and the developer. I would image that the entire search engine optimization community would be very interested in a strong alternative to Google Analytics that is free.