Depending on who’s doing the talking, Google’s new Enhanced Local Listings (currently available only in Houston, Texas and San Jose, California) are either a boon to small businesses with small advertising budgets or the end of organic search as we know it. Here is what all the heated discussion is about.

The Google Lat Long Blog describes it as “a new ads feature in local search that allows business owners to enhance their listings.” Apparently, it is not a matter of “buying position” on the SERP: “When the listing shows up in your Google.com or Google Maps search results, the enhancement also appears alongside it.” 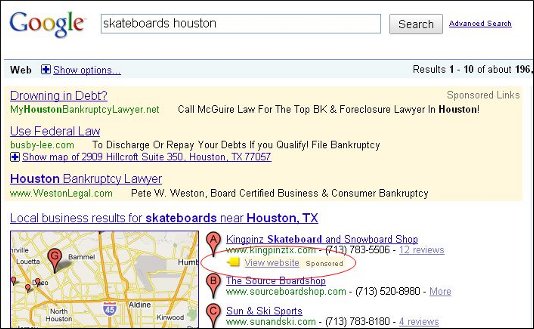 This service costs $25 per month and according to Google, it does not affect your search engine rankings. It only shows up beside your listing where your listing would appear anyway. So what are the pluses and minuses of this program? Forums have been thrashing it out the past couple of days. The two main arguments are: 1) It could help small businesses who don’t have $1000 or so a month for an effective AdWords account and 2) Just you wait: this will result in purchasing rank eventually and organic search as we know it on Google will be over. Let’s take the arguments in turn.

OK, if you’re a small business, you probably don’t have the money or the time to plan and execute a competitive ad plan on AdWords, and the return on investment of a smaller AdWords account isn’t always worth the trouble or cost. And even small businesses can fork over $25 to highlight their ad and include a link to a coupon, menu, photos, or just the website. Maybe it would be good to run for a month while they had a special promotion going on. There’s little question that Google’s bottom line will benefit. According to a Chantilly, Va. local business advertising company called BIA / Kelsey, advertising for small businesses is a $29 billion market. Those $25 flags will add up fast if Google rolls the program out nationwide.

Google says that it is thinking about taking the program nationally, but they don’t know exactly when. Businesses in San Jose and Houston can get into the program and get an enhanced listing with a little yellow flag and link for free for the rest of February. In March, it will start costing $25 per month. Businesses that don’t rank won’t really get anything for their $25, so local SEO will still be important.

If you have a small business who’s claimed the local Google listing for your site, whether you buy an enhanced listing or not you get something called dashboard analytics that will tell you when a visitor hits your local maps-based listing where they go: to your website, directions to your place, or your Google Maps record.

There are plenty of people, though, who see this as a slippery slope to paid rankings. Some of them believe that as the program grows, it will become competitive (like AdWords), and the position will be determined by the highest bids. Others think that if the program is nationwide, everyone will pay $25 per month and the enhanced listings will no longer stand out in a sea of little yellow flags.

Then there are those who believe that now Google has its big toe in the door, eventually there will be a more complex structure for price and what it gets you and after people get used to it, paying for real estate on page 1 of the SERPs will have worked its way into the mix without anyone thinking its any big deal. Boom: the end of Google’s organic search results. With AdWords already putting a price on 10 to 20% of the space on each SERP, Google will eventually want the other 80 to 90% to be monetized too. Other conjecture for Google’s nefarious plan include offering something like number one placement with purchase of a “premium” package.

The most likely scenario is that the program will roll out nationwide, everyone will pay $25 for a flag, and therefore nobody’s listing will stand out (except, ironically, maybe the oddball who ranks and doesn’t buy the enhanced listing). Pay for rank? I don’t know. It seems as if Google has an awful lot to lose by doing that. I suppose it is possible that Google thinks it’s so big and dominates search engines so thoroughly that they could pretty much do what they want and get away with it.

But if that were the case, it would make the time ripe for a new or open-source search engine to bust out due to its simple interface and truly organic listings. Or else Google could separate their search into something like “New Coke” (where businesses can buy rank) and “Classic Coke” (where the results are pure and ads are either gone or could be turned off). That would allow those who actually care about relevance and quality to do their thing while the ones that were OK with buying ranking could have their own search universe too.