Branding as a Part of Google’s Algorithm

Just over a year ago, Google made some changes in their algorithm that appeared to be giving weight to “brands.” Now, “brand” is a short word that’s loaded with a lot of meaning. When this change took place, there were plenty of people running around in circles waving their arms in the air thinking that the big, rich corporations were going to dominate the search engine rankings and the whole purpose of organic search would be lost forever (the purpose being bringing users relevant results that could be from anyone, anywhere if they were right on target).

Fortunately, the passage of time has let people make some more considered analyses of that change. To get up to speed, let’s take a quick look at some of the ancient history (dating back to 2003) in search engine technology.

In November 2003, something now called the Google Florida Update took place. While only the insiders at Google really know what happened back then, the results were doom for several types of sites:

At that point, SEO became complicated enough that it started taking experts to figure it out rather than just armchair SEO quarterbacks. Before you could rank (eventually) by buying and / or trading links with your target keyword in the anchor text.

While the infamous Florida Update was the most earth-shattering, several other changes took place in the Google search algorithm that definitely had an effect on rankings. There was one change that was so hard on artificial anchor text manipulation that Google actually filtered out some brands using their real, authentic names. Here in 2010, the Google search algorithm is a little like the U.S. Tax Code. It’s so complex that even the ones deep inside Google sometimes don’t anticipate collateral effects and depend on SEO experts outside Google to bring them to their attention.

But some of the changes are widely understood. In January 2005 Google proposed the rel=nofollow tag as a hedge against blog spam. By September 2005, you could be considered a spammer if you bought links without the rel=nofollow tag on them. Several social websites adopted the nofollow tag, which diminished the juiciness of the link juice that came from being a known publisher creating linkable content.

In 2007, Google started its Universal Search, which stirred in content from vertical search databases with the organic results. The result was that Google News, YouTube and other video content, Google Maps and Local, Google Product Search, and Google Books were promoted. Toss in 10,000 or more remote quality raters and you could no longer manipulate search results on the cheap unless you had a trusted site that people would stand behind.

In October 2008, Google’s Eric Schmidt gave some SEO information that went a little beyond the standard “Write good content” mantra that Google and SEO researchers tend to harp on (I know I’m guilty of it too.) Here is a quote from Schmidt to a bunch of magazine executives from that time.

“The internet is fast becoming a “cesspool” where false information thrives. Brands are the solution, not the problem. Brands are how you sort out the cesspool … Brand affinity is clearly hard wired. It’s so fundamental to human existence that it’s not going away.”

He also gave strong hits that word relationships would be gaining in importance.

“Wouldn’t it be nice if Google understood the meaning of your phrase rather than just the words that are in that phrase? We have a lot of discoveries in that area that are going to roll out in the next little while.”

So why did Google start giving more weight to branding? Because there are tons of affiliate sites exploiting SERPs. They outrank established businesses and big brands. If you’re a user, it’s best to have the first SERP contain a combination of affiliates, big brands, and other sites to maximize your options as a searcher. The results now – just over a year after the increased emphasis on brand, show a variety of results. The three screen shots are parts of the first SERP on the search phrase “health insurance.” You have sponsored links, results from the big insurance brands, some informational (wiki) links, plus news and book results. This doesn’t look like a wholesale takeover of the first SERP based on the size of brand. 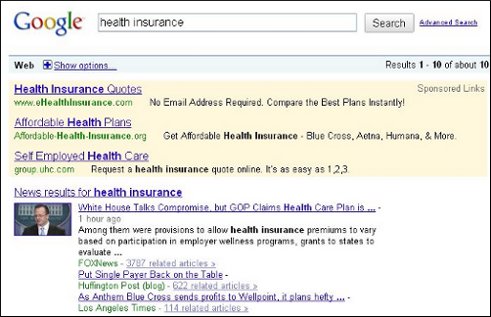 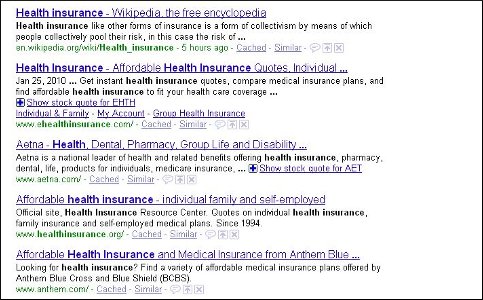 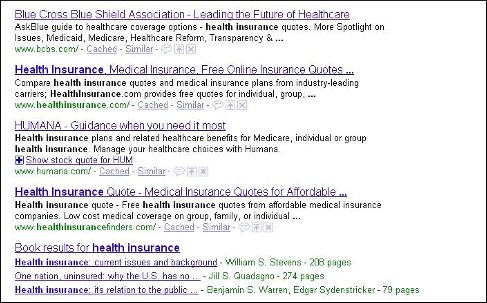 If Google likes established brands, then they’ll cut out a lot of dodgy sites. But, will big brands always mean non-threatening, vanilla content? Brands don’t necessarily answer searchers’ needs, and there is no guarantee that big brands equal quality content. Quality can often be found in smaller, newer sites that have not had the time to establish themselves. That’s supposed to be one of the greatest things about the internet, right? Your good content can theoretically be seen by anyone with an internet connection. There’s a danger that if the first SERP looks like a page of ads for the biggest and most dominant brands, that people will search elsewhere.

So far that doesn’t seem to be the case. The change seemed to only affect upper level keywords, mostly one-word key phrases, and these have been shown to be precisely the keywords that don’t convert well. Ranking for keywords that actually bring in revenue does still appear to be spread well beyond the big brands.