Mozilla Firefox Breaks Up With Google

On December 1, 2014 Mozilla rolled out version 34 of its popular open source internet browser – Firefox.  This may not sound like a big deal as updates to Firefox come pretty frequently but what was included in this new update may very be.

The default search provider has been switched to Yahoo in the United States.

Since 2004 Mozilla Firefox has been in an agreement with Google to use them as their default search provider on the home page and the search box in the top right corner in almost all countries.  This has been the main source of revenue for Mozilla over these past 10 years which had forced them to become dependent on Google.

While some debate the switch is solely based on contract negotiations and the search deals, Mozilla is sticking to its ideals and declaring this change is fitting with their mission of promoting choice and independence on the web.

You can read the full release here on the Mozilla Blog. 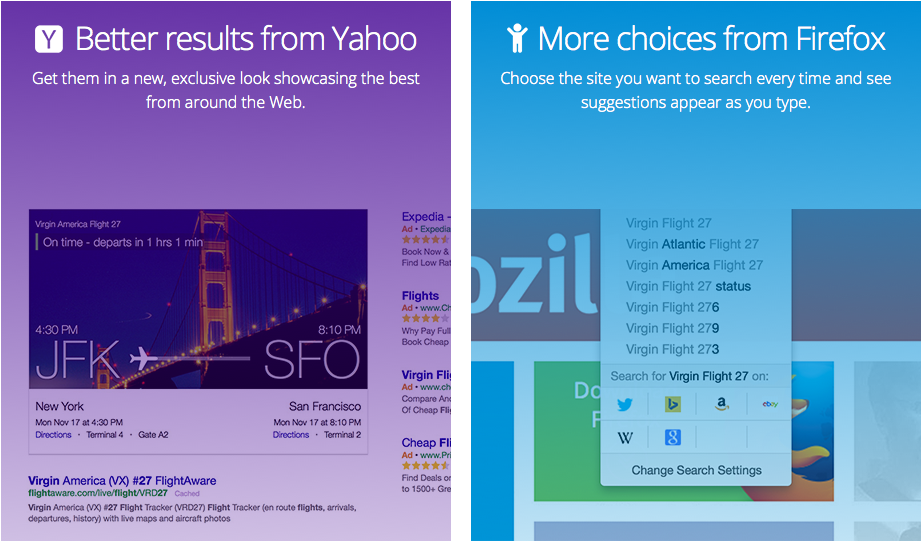 They even made this nice little video about it:

Why This is Important

This update only affected people that were using Firefox’s default search provider meaning if you had previously switched to DuckDuckGo or Bing it will stay – only people who never changed this setting are affected.  Many users do not mess with the settings in their browser and simply stick to the defaults.  While I’m sure some users will realize and want to switch back, it stands to reason that a majority of the people who didn’t change this setting before may not change it now and this could deal a significant blow to Google’s traffic and potentially traffic to your site.

Although Firefox’s user share has been declining, after looking through a few accounts; Firefox still seems to average about 9% of the total organic traffic here in the United States:

Internet marketers and site owners worldwide should be on the lookout over the next coming weeks to see what impact this has on their sites as more an more people update their browsers.

With Firefox users still contributing to over 100 billion web searches per year it will be important to keep an eye on the state of Yahoo search as well as your organic / advertising efforts there.