Has your website’s search engine ranking dropped drastically for no apparent reason? It is possible that your site has been hit by a domain level penalty from Google’s web spam team. A domain level penalty means your whole site has been demoted drastically in the search engine rankings – not just certain pages of it. The bad news is this can be difficult to pin down. While there are tools to help you figure out if your site has been penalized, there is a degree of speculation about it.

When your site’s Google search engine ranking takes a hit suddenly, then you can pretty easily conclude that you have done something wrong in the opinion of Google. They’re not all that specific about what happens when they “catch” you doing something wrong, and exactly how they penalize you. But in general, there are a few categories into which these mistakes fall, and there are ways to make a reasonable conclusion about which sin you’ve committed.

Here is how to figure out if you’ve been hit with a site level penalty.

Cataloging the various Google penalties people have come across is like trying to herd cats. Whatever relationship exists between the punishment and the crime either isn’t transparent, or is not handled evenly across the board. Being banned is, of course, as bad as it gets, since your site is suddenly not able to be found. This usually only happens when some kind of serious deception is going on on the site. But there are a few activities that have been pinned down as sending the Google gods into a frenzy.

Domain level redundancy is one thing that can get you penalized. This is what happens when webmasters clone sites. In other words, they point the Domain Name System (DNS) from several domains into the same directory. This makes each domain display exactly the same site.

If you duplicate the same content over several pages or sites, or if someone copies your site or content, Google will ding you for content redundancy. If you think someone else is ripping off your content, check Copyscape and see if you can track it down.

Purchasing a number of domains, each of which address separate keyword targets is now considered punishable.

If Google thinks you’re a link seller, your links will rapidly mean zilch. If your links do not pass on PageRank juice, they’re worth less than the pixels they’re written on, even if you are using them on your own site.

There is a certain amount of mystery surrounding the Google “sandbox” theory. Some people believe that young sites are penalized. You don’t see this penalty unless you try to SEO the heck out of it within the first few months of the site’s existence. Apparently there is a certain amount of dues paying your site has to do before your SEO starts getting respect from the big guys.

And, of course, there’s the fact that the Google algorithm isn’t perfect. Algorithm quirks can have the same effect as a penalty if it makes your site unreachable.

If you want to find out if your site has been penalized, we have a free penalty checker tool you can use if you go to http://tools.lilengine.com/penaltychecker/. Click the button below to give it a try. 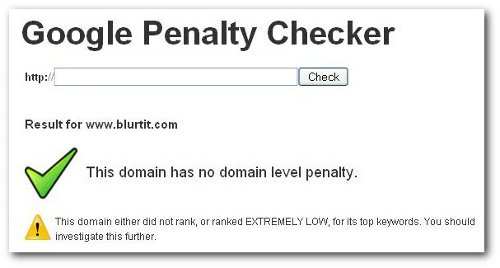 If you suspect your site has been penalized, there are a number of steps you can take to find out if it has, and why. Once you fix the problems, you can request re-instatement by the Google search engine and eventually get back in its good graces.