On Jan 27, Google promoted its social searching algorithm from the laboratory to “beta,” which means it’s now a regular search option. Reactions so far are mixed. Social searching has been praised by those who care what their friends on Twitter think of the new iPad, and criticized by those who wonder how anyone could care what their Twitter friends thinks of the iPad.

To partake of this new morsel on Google’s search buffet, you need to sign into your Google account and update your Google profile to include links to your accounts on social sites like Twitter and Facebook. But the Facebook link is a little deceptive. The only thing Google can index from Facebook are the public parts of people’s profiles. There isn’t a way for Facebook users to make their status updates available to the entire web.

So Google won’t be searching it to see what relevant things you have to say about a topic one of your Facebook friends has researched as of now. But if there is something relevant in the public part of your Facebook profile, it can use that. Somewhat ironically, FriendFeed, which is now owned by Facebook, is geared toward public information sharing, so if you are on FriendFeed and modify your Google profile to reflect this, that content will eventually become available.

You may have noticed that Facebook has an “everyone” privacy option for information you post there, but in this case “everyone” only means everyone who is signed in at Facebook rather than everyone on the entire internet. And Facebook recently said that they have no specific plans to make information available internet-wide other than what is now contained in a member’s public profile page.

What Facebook does do is let administrators of promotional Facebook pages and Facebook Groups to make these pages public on the internet. Facebook Groups are made mostly for sharing information and photos among school alumni or among people interested in a specific topic. The pages are made for public figures and businesses to have a presence on Facebook to interact with customers and fans.

Once you update your Google profile, you’ll get a message like the one in the first screenshot saying that your profile is now eligible for inclusion in social search. It doesn’t happen instantly, however. Apparently Google has to crawl your profile before the change takes place, so if you wonder why you aren’t getting the option to click on “My Social Circle” and “My Social Content” in your search results, this is why. Another reason is that as of the end of January 2010, Social Search is only available in English, and according to Google will take a few days to roll out to everyone who uses Google in English.

Social Search was officially introduced in October 2009 as yet another form of search personalization in addition to the type of specialty searches you can do now (such as Blogs, News, Scholarly Results, and Books). Social Search will also extend to Google Images, and this will make it easier to find photos shared by your friends on Flickr and Picasa. You’ll be able to do a search on “things to see in London” and theoretically get search results that include the photos your Facebook friend uploaded to Flickr from his trip to London.

Google isn’t the only search engine that wants to add social search functionality. Microsoft announced in late 2009 that it would begin adding Facebook member status updates to its real time search engine results sometime in 2010. But Microsoft is up against the same barrier as Google when it comes to only being able to mine what’s contained in public Facebook status updates. But when (if?) Facebook allows members to make status updates public, Google will evaluate the possibility of including the information contained there in Google results.

Will you notice a difference in your search engine results today? Not so much.

As you can see in the second screen shot, a search on “Twitter accounts on SEO” gives two relevant Twitter tweets from the past 24 hours, but since Google has yet to index my new improved profile with all my Twitter, Facebook, etc. information, I don’t get any results with the options of “My Social Circle” and “My Social Content” yet. 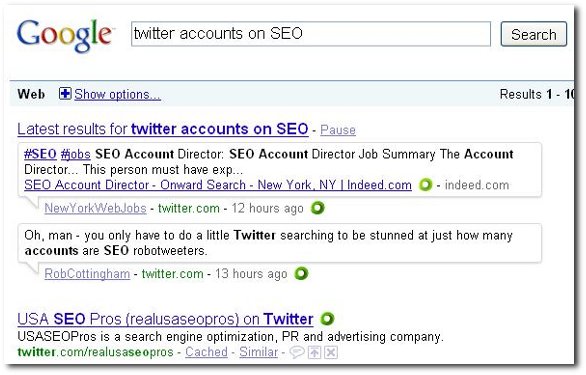 What can we take away to the advent of Social Search? As of this moment, not a lot. However, Google hopes to encourage everyone to set up or modify their Google Profile (www.google.com/profiles), which means that your Google Profile could end up becoming vital to your online identity.

Google believes that Social Search will add a layer of relevancy to search results because generally people include people in their social circles whose opinions they trust. But just because you like your former roommate, does that mean you trust his opinion on real estate investments? There are clearly cases where Social Search will be more helpful than others.

There may be unforseen consequences for people who aren’t careful. Someone who follows his “girlfriend-on-the-side” on Twitter and then does a search that returns a tweet she wrote could risk others finding out about her presence if he were to stay logged into his Google account and step away from the computer. But then again, this may not be any more likely than it already is with run-of-the-mill computer carelessness.

Is Social Search a game changer? I’m skeptical. At San Francisco’s recent Web 2.0 Summit, Facebook’s Sheryl Sandberg stated that “There is a very fundamental shift going on from the information Web to the social Web.” But is there? If you’re using the web to do research on a medical condition, say, how much will it matter what someone in your Facebook circle thinks of it or knows about it? My guess is that Social Search will be an evolutionary rather than a revolutionary step in search technology and usefulness.