How to advertise on mobile

5 campaigns you wish you thought of 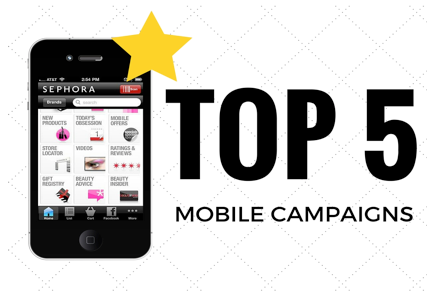 The strategic and creative possibilities offered by mobile devices are the future of advertising and marketing. People spend more and more time on their smartphones and less time watching TV. As a logical consequence, promoting a brand means to rethink the allocation of advertising budgets between old and new channels of communication, even if things seem to be moving at a slow pace: while 37% of the total time dedicated to media was spent watching TV and 24% on mobile, advertising spending on TV remains at 41% compared to 8% on smartphones and tablets (source: KPCB).

However, the signs of this transformation are becoming evident: while advertising spending on TV, news, radio and all other media tend to decrease compared to the previous years, it is growing on mobile devices. 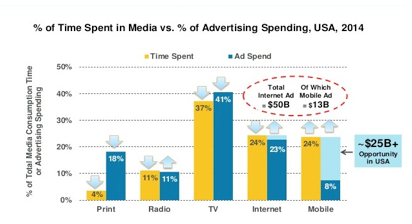 Marketers are beginning to consider mobile in the marketing mix, not as an ancillary activity but more and more as the protagonist. The advantages are considerable: you get visibility on a channel where consumers are spending more of their time, where you can launch campaigns with lower budgets compared to investments in traditional media and you can measure the results more easily. Finally, you can take advantage of new creative potentials: just like the beginning of the TV era where there were no predefined formats, the mobile territory is yet to be explored.

Out of the box mobile creativity

Up until a few years ago, online advertising consisted of simple static banners offering few possibilities of customization and with a limited appeal on users. Today’s technology offers endless creative possibilities with which you can create campaigns tailored to your target.

Compared to traditional media activities, the design of the mechanics of the campaign on mobile requires more time and analysis: it is important to understand the behaviors of your target on mobile, the dynamics of utilization and involvement, and the technology that is suitable for your objectives.

Some brands, which have had the courage to invest in mobile for some years, have launched innovative campaigns that demonstrate a full understanding of the potential of this channel: the top 5 mobile campaigns that have stood out for their creative use of the medium and for their outcomes are set out below. These are five stories that could inspire every web marketer.

The story: In order to promote their L-Series smartphones targeting young and female audiences, LG decided to create a game on Twitter which can be played on a mobile device.

The challenge was to find one of the 25 secret locations on an online map where tickets for the concert of One Direction had been hidden. Each time the user would use the hashtag #lgtickethunter, the map would gradually zoom in until it would reveal the exact location where they had hidden the tickets.

The results: More than 9,000 people visited the site linked to the campaign, which received a total of 40,000 views during the campaign period. The hashtag #lgtickethunter was used 58,000 times and sponsored tweets got an engagement of 37%. The sales of L-Series phones increased by 28% during the campaign.

The inspiration: When creating a campaign think about what can strike and engage the target. In this case, they chose a company like Twitter, used by 33% of adolescents (source: PewInternet), and a prize that is related to one of the most beloved bands by teenagers. 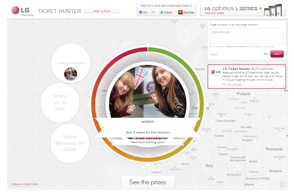 The story: To promote the new model Boost in the Philippines, Adidas created an ad on mobile that included an interactive game: by alternately sliding the index and middle fingers on the screen, you could simulate running on different types of terrain that the shoes could endure.

The results: The time of interaction with the ad was, on average, over 60 seconds with a click rate of 1.27%, with peaks above 2%, generating more than 15,000 clicks during the campaign.

The inspiration: Introducing a fun element in a mobile campaign is often a winning card, because it responds to a specific function of this tool. People often look at their smartphones to take a short break from their commitments or to pass time and the game proposed by Adidas perfectly responds to their desire for entertainment. 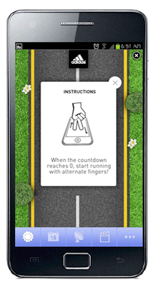 The story: Sephora announced on Snapchat and Instagram that they would have revealed a preview of the discounts for Black Friday on their own app. To the surprise of their followers, some of these promotional items were already revealed on Snapchat while, to see the complete list, people were invited to access the app or to download it, if they have not already done so.

The results: During the days of the campaign, the ranking of Sephora To Go app for iPhone rose from 157th to 71th place, confirming that the right strategy to encourage consumers to download their app is by offering them real benefits and exclusive contents. 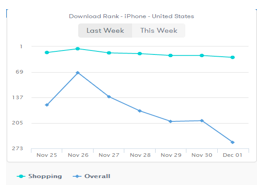 The inspiration: Create a multichannel campaign, using different social medias and selecting the most interesting ones for the type of promotion, the period and the target of the operation: Snapchat, for example, is one of the most used social media by consumers during Black Friday and the main target of Sephora (women under 35) is an avid user.

The story: The online store Very ran a multichannel campaign that included Facebook, Twitter, Shazam and geofencing, with the aim of keeping in touch with their target via mobile devices. Alongside TV spots, commercials appeared on social medias, while the music on the ad made integration with Shazam possible: although it was not a famous song, it appeared as the third ad on Shazam during the period of the campaign.

The results: The campaign helped to achieve an increase of 45% in mobile sales. The return of this operation was 15 times higher than the investment.

The inspiration: Create a path to accompany the consumer at different times and situations. Invest on strategic opportunities that characterize mobile devices and that no other medium can offer, that is being in contact with people at all times and wherever they are. 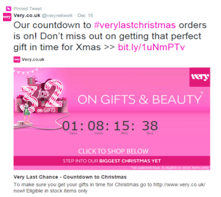 The story: The chain Pinkberry created an ad campaign on mobile which consisted in communicating to the users the distance of the nearest yogurt shop. By clicking on the ad, you could get a discount of $ 1 to be used in that shop.

The results: Pinkberry sales doubled during the campaign period.

The inspiration: Seize the moment by creating campaigns that capture people’s attention in the right place at the right time, taking advantage of the fact that over 90% of mobile users search locally (source: MMA). Many recipients of Pinkberry’s ad wouldn’t have bought a cup of yogurt at that time, if they had not seen the ad, noted the proximity of the store and if it were not for the discount coupon enticing them. 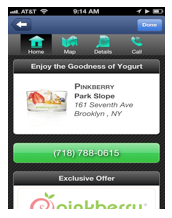 How to start a good mobile campaign?

Firstly, you should make sure that there is a perfect accessibility of the basic tools which are connected to the campaigns that you will create, that is to say the app and the website, which must be perfectly mobile-optimized. Otherwise you could dull the effectiveness of your initiatives: advertising can bring traffic to the site or the app, but if from this point onwards, things do not work, users may leave this path without having made any purchase or interaction.

If the site and app are inadequate or are non-existing and the web marketer has at their disposal a limited time and budget, the solution would be to choose an online system to create these instruments in a few minutes and in total autonomy. Some systems also allow to integrate additional features such as mobile coupons and app notification which could be useful for your future campaigns.

From here on, everything depends on your skills, observations, instincts and imagination. An advice? Rethink McLuhan’s famous quote, “the medium is the message”: the same structure of smartphones and tablets influence the content they carry and the people to whom it is addressed. Mobile is instant, personal, and omnipresent: coming to understand its peculiarities and applying them to your own brand is the goal that every web marketer should aim for in 2016. Who will make it to the top 5 next year?

Silvio Porcellana is the CEO and Founder of mob.is.it, the online tool over 1,000 agencies and professionals use to build mobile websites and native apps for customers worldwide. From his retreat in the Monferrato Hills in North West Italy, he bootstraps companies, writes about web and mobile marketing, and helps customers succeed online. Read more from Silvio at mob.is.it blog